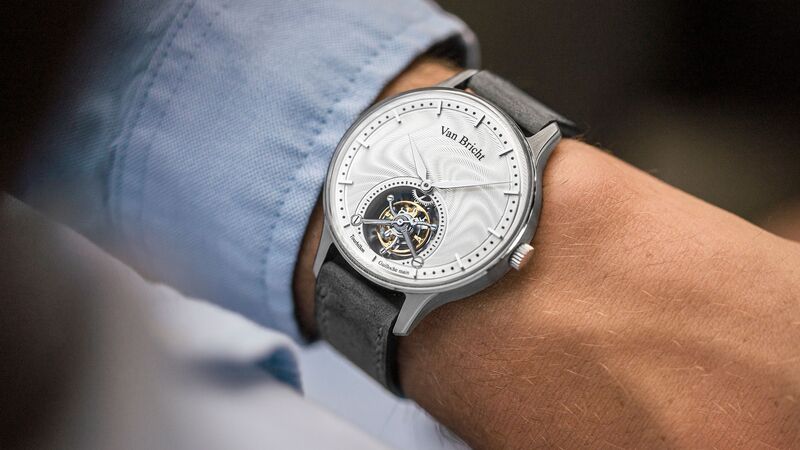 The "Old Mind" series consists of two prototypes, each featuring a different style of hand-guilloche pattern on the dial, and a 60-second tourbillon movement. This is the break-out model from Van Bricht, a fledgeling high horology manufacture out of Belgium. Two young watchmakers teamed up to form the brand, and they plan to make 25 examples of these watches.

Sébastien Lambricht and Bernard Van Ormelingen both attended the same watchmaking school in Namur, Belgium and then independently went on to specialize in different disciplines in the watchmaking world before coming together to form Van Bricht, an amalgamation of both founder’s last names. Sébastien, now 29, completed an internship at Rolex Benelux, then went onto Patek Philip Benelux, and then settled in as the head of the workshop at Ressence Antwerp. At Ressence, he's responsible for prototype development, and he's brought some of the case design philosophy from Ressence into the Old Mind, with an expansive dial, and a seamless flow between crystal and case.

Bernard, at 21 years old, hasn't wasted any time making his name as a top guillocheur around Europe. While he's trained in watchmaking, it's the old art of hand engraving and engine turning that's guided his budding career. He trained under the engraver Alain Lovenberg, as well as interning at Jaeger-LeCoultre's Métiers Rares department.

Conceptually, the Old Mind strikes a careful balance between contemporary movement innovation, and an old-school engine turned dial aesthetic. The 316L case is 6.5 thick, but the dual-crystal design raises that to a total thickness of 10.6mm, which I think is reasonable, considering the Old Mind case houses a tourbillon movement. The entire case is 40mm wide, but visually, a lot of the large appearance is due to the 37mm dial. And all that dial real estate puts Bernard's guilloche on full display. These two prototypes wear two very distinct guilloche patterns, the first of which is a reserved barley pattern rounded design, quite often used in high watchmaking. The second pattern gets a little more interesting. It's Bernard’s own take on the Moiré pattern, but with both examples, the centerpoint of the guilloche is exactly where the tourbillon sits at six o'clock as opposed to the traditional positioning of the guilloche extending out from the center of the dial. The effect is novel, particularly on the Moiré design, almost like the radiating light from the sun as it casts it last rays into the sky right before it's out of sight.

The tourbillon movement features hand-chamfering, and a complete architectural overhaul and reworking in order to blend with the case seamlessly. A 110-hour power reserve meets modern standards, while the bridges are all engraved by the Bernard’s mentor Alain Lovenberg. A not-so-subtle nod to an old-school technique. Lovenberg is widely considered the last of his kind; he’s world renowned for his engravings on shotguns, knives, pens, and jewelry.

I was on a Jaeger-LeCoultre factory tour when I first encountered Bernard. He was seated at a turn-of-the-century rose engine, peering through a microscope working on one of JLC’s upcoming releases before he was introduced as a rising star that had been selected for a competitive internship at the Jaeger-LeCoultre factory’s Métiers Rares department. He popped up, shook our hands, and apologized that he wasn't able to show us the dial he was working on at the moment, because the watch hadn't been announced yet. He was bursting with youthful enthusiasm and was eager to share his passion for the fine art of guilloche, so he took the watch off his wrist and showed it to us. Besides our group of visitors, he might have been the only person not wearing a JLC watch at the factory. But he wore something that was far more personal than anything he could have bought. It was a watch he had made for himself as the capstone of his training in guilloche techniques.

During our brief introduction, he mentioned that he had been developing a watch with a partner in his spare time on top of a small operation which he had created to explore guilloche dials. His days were spent at Jaeger-LeCoultre, his nights were spent on what would eventually become Van Bricht. What stuck out to me most was the refreshing sense of optimism and the willingness to hustle to no end to make it happen. It was clear he was hungry, and I think the watch certainly shows that the pair didn’t want to just put something out that didn’t bring anything new to the table. The Old Mind is a different sort of beast; in a way it's quite disruptive. Two young watchmakers came together with a vision, they had the skills, and they found the resources to make it happen. And what they came up with breaks the mold of the establishment in high horology.

Van Bricht is a leap. It’s a ballsy move to go up against players with centuries of tradition behind them, and enter the market with a tourbillon that costs 45,000 euros ($49,423). It strikes me as an act of blind faith that only someone with ultimate conviction would do. It’s almost too risky to make sense, but this an industry where tradition is sacrosanct, and to make a name for yourself you must be different. It's great to see young players come in and shake it up. There's a recurring conversation about  the future of watchmaking and how we can keep the antiquated art alive. Well, this is what the future looks like. Whether or not the watch is a commercial success, one thing is for sure: Bernard and Sébastien are worth keeping an eye on.