Fancy watches aren’t just for golf and tennis anymore. But, players are discovering, what’s on your wrist might not result in emotional fulfillment. 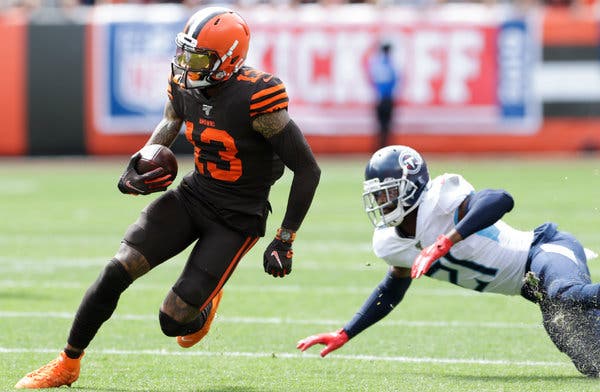 When Odell Beckham Jr. of the Cleveland Browns took the field wearing a $190,000 Richard Mille wristwatch during a blowout loss to the Tennessee Titans on Sept. 8, the question was: Was he violating league rules, or just the rules of common sense?

His decision to carry a work of fine Swiss art onto the field in a tackle sport seemed new and also a little bizarre — like a mixed-martial arts fighter carrying a Picasso sketch into a cage match.

But Beckham’s much-dissected fashion statement was also emblematic of the big-money sports culture of 2019, in which eight-figure athletes increasingly flash six-figure watches as a branding opportunity for player and watchmaker alike.

“A pop-cultural arms race has definitely emerged over the last decade or so when it comes to high-end watchmaking and top athletes,” said Stephen Pulvirent, the managing editor of Hodinkee, an influential watch site. “It’s become the norm now. And for most people, seeing a watch on the wrist of someone they respect and admire is a pretty powerful entry point to the world of high-end watches.”

Even in football, a sport where players routinely wear — and sometimes lose — $50,000 diamond stud earrin gs during games, Beckham’s decision to wear a lightweight, Lamborghini-priced chronograph known as an RM 11-03 McLaren, stood out — and not just because of its head-turning strap rendered in Browns-helmet orange.

For one thing, football players are not supposed to wear watches during games, at least according to a strict reading of Rule 5, Section 4, Article 4 of the National Football League’s rule book, which prohibits players wearing “uncovered hard objects,” which presumably could cause injury during play.

Beckham, who wore a $2 million Richard Mille during pregame warm-ups the following week, was not buying that argument. In the days following the Tennessee game, he argued to reporters that he was being unfairly singled out because of his flamboyant image, and that lots of players wear jewelry or metal knee braces during games. Besides, he said, the watch was only plastic.

With his efforts to merge football with haute horology — and ESPN later quoted a spokesman for Richard Mille saying that Mr. Beckham is not a paid endorser for the brand, simply a customer — Beckham was merely playing fourth-quarter catch-up with the stars of golf and tennis.

Golf stars like Tiger Woods, Michelle Wie and Rory McIlroy regularly sport big-ticket watches by Rolex and Omega during tournaments. Golf, after all, tends toward the aristocratic end of the sports landscape, with a C-suite fan base. And unlike basketball, the game unfolds languidly over the course of an afternoon, free from the pressure of flashing shot clocks. Theoretically, it makes sense that golfers might want to elegantly monitor the time from their own wrist as they meander the back nine.

Tennis, too, is a sport where it has become routine to see Roger Federer — a native of Basel, Switzerland, the home of Baselworld, the world’s biggest watch fair — flashing a glimmering Rolex each time he lifts a Grand Slam trophy. (Federer has long served as a brand ambassador for the luxury Swiss maker).

Rafael Nadal, too, has transformed from global tennis star to walking billboard for Richard Mille by showing up at big matches with watches that cost as much as a suburban split-level house. This includes the lightweight RM 27-03 Tourbillon, priced at $725,000, that he wore while winning the French Open in 2018.

Plutocrat-worthy timepieces have become such an inextricable part of tennis culture that Serena Williams rocked a rose-gold Royal Oak Offshore by Audemars Piguet for her recent debut on a Wheaties box.

But watches also rule in soccer, a global obsession — and marketing juggernaut — with an estimated 3.5 billion fans.

Cristiano Ronaldo, the Portuguese star, has 184 million Instagram followers, making him the most followed celebrity in the world, beating out Ariana Grande and Beyoncé. And as a paid pitchman for Tag Heuer until recently, “there is not a private plane he steps on, or abs-revealing Speedo he slips on, without being watch-clad,” said Roger Bennett, a host of the popular soccer podcast “Men in Blazers.”

While Law 4 of the FIFA rule book prevents players from wearing watches, necklaces, or earrings during matches, to prevent injury to players, “the second the final whistle blows and the post match interviews begin,” Mr. Bennett said, “the players ice-up in their Pateks, Chopards, and Breguets.”

“Watches and footballers have become so symbiotic,” Mr. Bennett said, “that you only have to mention any elite player and their fans can name their watch sponsor almost as quickly as they can the club they play for.”

The benefits for brands are obvious. Many of the most coveted luxury watches these days are, technically, sports watches — a $34,000 Rolex Daytona in 18 karat gold is, at least in theory, a timing tool for auto racers. It makes sense that the manufacturers would use the wrists of famous athletes as a sales device.

For the stars, endorsement money is obviously part of the allure, although the terms of those contracts are rarely disclosed.

But perhaps it is not the only inducement. In an era when athletes such as Russell Westbrook and LeBron James have become staples on the front row at fashion shows, athletes clearly have learned that the right watch is the linchpin of any drop-dead ensemble.

Fine watches send a signal to fans that fans that today’s multimillionaire athletes are not sweat-drenched gladiators, but men and women of taste and refinement, who appreciate exquisite timepieces just as they would fine wine or contemporary art. Basketball players such as David Robinson, Andre Iguodala, and J.J. Redick, for example, have all geeked out on their watch collections on the Hodinkee interview series Talking Watches.